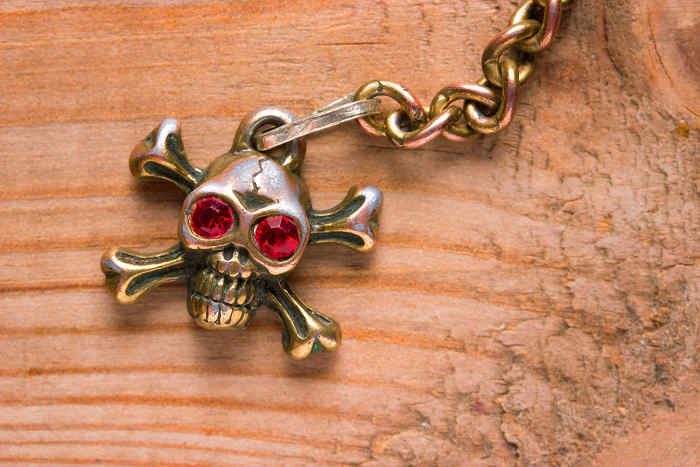 Photo by Bigstock Photo: LijphotoMarlowe: I saw something else — something that didn’t sink in right away. It was a tiny iron skull on an iron chain hanging from the gold charm bracelet she wore on her right wrist.

When you figure something out, you might shout, “Eureka!” meaning, “I’ve got it! I’ve found the answer! 找到了!”

In detective fiction, the detective often gets hit on the head and knocked out. But since he’s a hardboiled detective, he can take it; he’s tough. In fact, when he comes to, he is no longer in a fog. His thoughts are very clear, very lucid,  明朗. Everything comes into sharp focus, and he is able to come to an unmistakable explanation of the crime that took place. He’s able to put things together and crack the case. That’s what happens to Marlowe in today’s episode. It’s his eureka moment.

Let’s get caught up on our story:

First, Lou Bryant the stunt rider got killed, and at the end of our last episode, we heard a gunshot. Marlowe was questioning Moon, the mechanic, when it happened. Moon was about to tell Marlowe everything. Marlowe doesn’t get killed, but he does get knocked out. It looks like somebody is making sure that Marlowe never finds the truth.

Sorry, no time to explain:

Marlowe has a suspect and he is about to make an arrest. But at that moment, a new scenario comes to his mind. It’s just a hunch, but he has to check it out. He’s right! But he has no time to explain. All we can do is watch Marlowe as he tries to prevent a third murder from happening.

In this episode, you will have to try to catch up with what our detective is thinking. Marlowe’s got it figured out, but do you? Can you think like a detective? Listen, and then at the end of the episode, make your guess about who the murderer is. I hope you’re shouting “Eureka!”

Have fun learning the keywords with English-Chinese Flashcards and Games.
DL043 Keywords on Quizlet

Marlowe wants to stop Adrienne Granville before murder happens again. The playwright intentionally made this sentence unclear. What is Marlowe thinking? Does he think Adrienne is the murderer and that she is about to commit murder again? Or, does he think Adrienne is going to get murdered? Is she the criminal or the victim? Does he have to stop her from getting killed on the Wall of Death, or stop her from committing murder?

This is a really key question at the climax of the play. I challenge you. Be brave and daring — leave a comment below.