Home » DL040: Interview with a stuntman
Spread the love 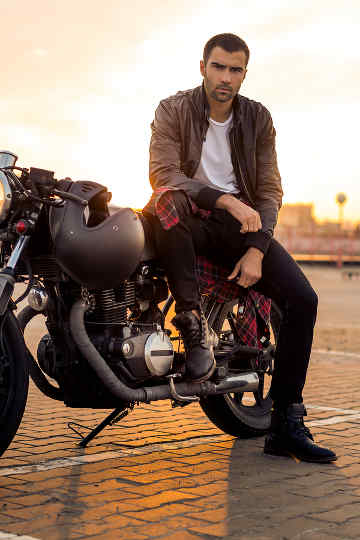 Photo by Bigstock Photo: NikkoliaPepper Riggs: It’s my trademark, Buddy. I’ve been knocked off the wall seven times in the last three years and beat old skull face every time.

Not much to go on

Marlowe is on a mission. He has agreed to protect Adrienne Granville from whatever it is that is threatening her. In order to carry out his assignment, he first of all has to find her and see what she is involved in.

He tracks down Pepper Riggs, the boyfriend. Pepper has moved on from racing dirt bikes to being a motorcycle stuntman. Will he take Adrienne into his act? Maybe. Well, that could certainly be life threatening, but Marlowe is sure there is more to it than that. Otherwise, why the letter threatening her father to make her lay off Pepper Riggs? What kind of harm does someone have in store for her?

In finding Pepper Riggs, Marlowe also finds Lou Bryant. He too is a stuntman in the motorcycle act on the Wall of Death. But trouble is brewing and trust is breaking. Lou seems to fear his own teammates. Has anyone got his back?

The Mechanic Blames the Girl

Everyone is pointing fingers at everyone else. Lou blames his caution on the bike, but the motorcycle mechanic says he’s made sure the bikes are all in tip top shape. He even checked on the bikes at 2:30 in the morning. Really, Mr Moon? What were you really doing in the motorcycle shed in the wee hours of the morning? Moon is tired of taking the blame for someone else. He points his finger at the newcomer to the group, Pepper’s new girlfriend, Adrienne Granville.

Listen to find out how Marlowe goes about following up on the little lead he had. He’s persistent, observant, and resourceful. It pays off. He learns a little more, but not enough to know who to trust, who to believe.

Have fun learning the keywords with English-Chinese Flashcards and Games.
DL040 Keywords on Quizlet
DL040 Supplementary Words on Quizlet

Lou Bryant is nervous. The mechanic says he’s nervous too, and doesn’t want to be the fall guy — the scapegoat who gets blamed when trouble happens. A mechanic could easily mess with the bikes, but he points his finger at Adrienne, Peppers new girlfriend. At this point in the story, the crime hasn’t even been committed yet, but who do you suspect? Please leave a comment below.