Sherlock Holmes and the Adventure of the Norwood Builder, Scene 5 Investigation Leads Holmes to John’s Mother In scene 5, Holmes and Watson go to Blackheath to call on John’s mother. Holmes has been in a very good mood ever since hearing about Lestrade’s new evidence, the bloody fingerprint. The evidence led Lestrade and Holmes […] 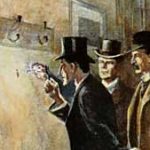 Sherlock Holmes and the Adventure of the Norwood Builder, Scene 4 A Look at the Crime Scene: Holmes and Watson go to Norwood to see the crime scene. He sees the signs of a struggle, the blood stains, and the marks in the dirt showing that something heavy was dragged across the timber yard. Some […] 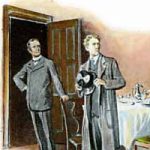 Sherlock Holmes and the Adventure of the Norwood Builder (Scene 3) John McFarlane Continues His Story Police Detective Lestrade’s comments and opinion irritate Holmes, so Holmes gets quite sarcastic and cutting with Lestrade. For example, Lestrade says, “I came on here myself to do my duty.” He strongly feels it is his responsibility to arrest […]

Sherlock Holmes and the Adventure of the Norwood Builder, Scene 2 McFarlane Seeks Holmes’ Help Lestrade arrives ready to arrest McFarlane, but Sherlock Holmes talks him into hearing McFarlane out first — to listen to his side of the story. The story has already hit the morning news, so Watson tells Holmes the newspaper version […] 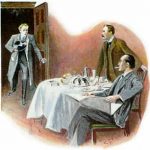 Apple PodcastsAndroidRSS
We use cookies to ensure that we give you the best experience on our website. If you continue to use this site we will assume that you are happy with it.OKRead more